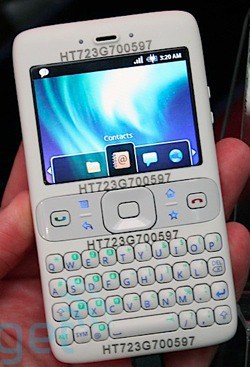 Steve Jobs might have thought he was lightly playing down reports that the Apple / Google rivalry had dramatically changed when he said "they decided to compete with us — we didn't go into the search business" at D8, but it appears that his phrasing didn't sit so well with Larry Page, who told Reuters yesterday that Jobs was doing a "little bit of rewriting history," and that the "characterization of us entering [the phone market] after is not really reasonable." Page, who was being interviewed alongside Eric Schmidt, also said that Google had been working on Android for "a very long time" and that the goal was always to develop phones with solid browsers to fill a market void.

That's true, of course — Google purchased Andy Rubin's Android, Inc. in 2005 — but it's also an equally slight distortion: when Android was officially announced in November of 2007, it looked nothing like the OS we know and love today, and the SDK emulator used an image of an HTC-built prototype that had much more in common with the traditional BlackBerry than the iPhone. (Fun fact: that device eventually became the Palm Treo Pro running Windows Mobile.) It wasn't until the G1 shipped almost a year later that Android started to look more like what it is today, and we'd even argue that it wasn't until Android 2.0 hit on the OG Motorola Droid along with Verizon's Droid Does marketing campaign that the platform grew into its own unique and successful identity — an identity that is now powerfully differentiated against the iPhone and driving accelerating device sales every quarter.

So, does any of this really matter? To the tech historians, perhaps — and Apple and Google clearly see what they're doing as historically significant. Apart from that, it's a pretty meaningless distinction; Eric Schmidt followed up Page's comment by saying that the market was big enough for the iPhone and Android to coexist, and we seriously doubt anyone's phone purchasing decision will ever turn on what platform was released first. But it's also clear that the competition between these two companies is at fever pitch, which is great news for the rest of us — let's just hope everyone involved remembers that Jobs closed his D8 remarks by saying "just because we're competing with somebody doesn't mean we have to be rude."