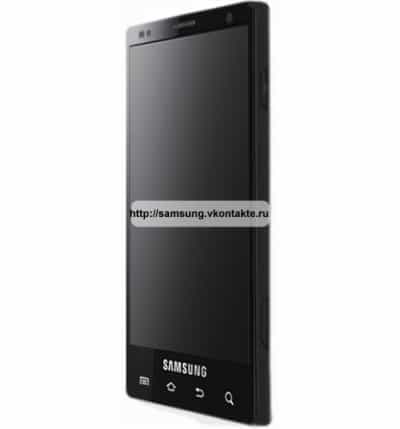 Samsung's brand new line-up of five Galaxy S devices hasn't even shipped yet. But, we're already hearing chatter about the Galaxy S' sequel device. The Samsung i9200 (being called the Galaxy S2) is not expected till Q1 of 2011 according to Russian web sources. But, that hasn't stopped the blogs from writing all about its incredible features. The specifications are listed below, and a device mockup to the right.

Where do these rumors come from?

The rumors of this Galaxy S2 slid thru the blogosphere on July 5th as Unwired View posted an article titled "Samsung i9200 Galaxy S2 details leak." But, where did these rumors start? Well, we've traced the sources back to O-Novosti.ru and a VK profile that created the mockup on the right. A few more speculative details were thrown in by a site called Itrans.

Why are we so darn suspicious?

I've listed a few of the reasons to support my case against the validity of the Samsung i9200â€²s specifications and design.

A probable explanation: some Russian guys who love phones found this fan made Samsung concept photo, threw together some dream specs, and posted this baby as the i9200, because it sounded close to Samsung's Galaxy S (i9000). Since every source is Russian, the blogosphere did little to check the validity of this phone, because most mobile phone blogs are run by English speakers and readers. This disconnect created by the language barrier is allowing foreign-made rumors to easily penetrate through the tech blogosphere's guard. We saw an example of this last week as Unwired View (curiously, the same blog that kicked this Galaxy S2 ball off…) had to pull back from their statements about a Russian podcast with Murtazin as Google's Dan Morrill angrily disputed some Android 3.0 rumors they posted earlier.