Skip to content
Trusted By Millions
Independent, Expert Android News You Can Trust, Since 2010
Publishing More Android Than Anyone Else
4
Today
131
This Week
396
This Month
5561
This Year
115566
All Time

Well this is one lucky Tiffany here, but she’s not alone. Wired UK was first to report that Samsung’s been quietly dishing out free Galaxy S handsets (the European flavor) to a few lucky British Twitter users. How so? Oh, four of them just made a fuss about their iPhone 4s, and the fifth guy needed help to choose between the Desire, iPhone 4 and Galaxy S. Before you all start tweeting your way to a free Android phone, though, it looks like the Korean giant’s only picking certain influencers for some cheap publicity — turns out our Tiffany here works in Digital Marketing for Cond© Nast, which is coincidentally Wired’s parent company. Tut tut tut. The other tweeples all appear to be similarly involved in marketing or publishing, with the exception of one student.

As if it hasn’t already rubbed enough salt into Apple’s wound, Samsung UK’s also running new Galaxy S ads that take an indirect shot at the iPhone 4’s antenna controversy with a clever bit of typography — you can see the dirty work after the break. Very nice, Sammy, but you better be careful playing with fire here, as we’ve found it pretty easy to death grip Galaxy S phones like the Captivate into losing a fair bit of signal. 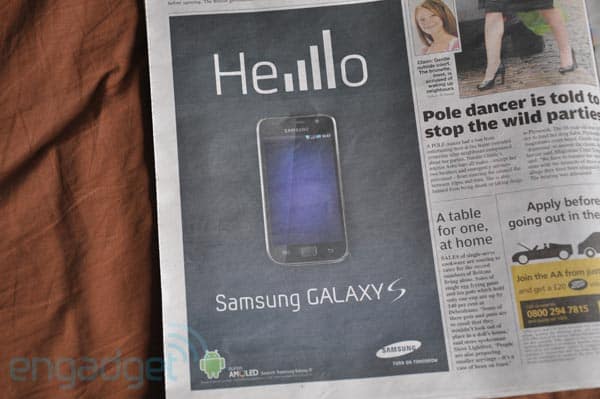