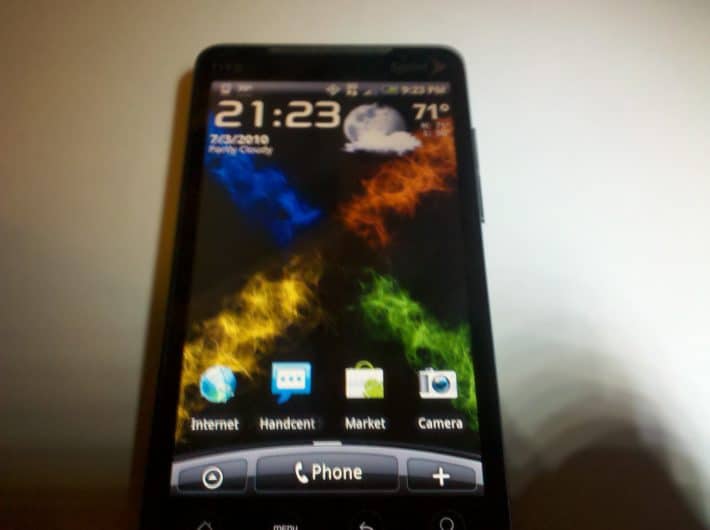 When I got told I would be reviewing phones quite a while ago, I figured, great, new chance to try out android phones, when I found out that the power house which is the HTC Evo was one I would be able to review, I got quite excited, the hype died down after hearing some things, but it came right back these past few weeks as I have been reviewing and getting a feel of it.

Wow, thats the first word I had for it when I got the box, it was a big nice phone. It looks slick, it feel great, its almost too big in a way. The buttons on the front aren’t really buttons at all, they are more touch screen than button, but this isn’t a bad thing. They feel right. They are kind of integrated right into the phone, but are great. The 4.3 inch screen is massive and great for… well anything, I could not find a reason why the screen being so big was bad.

This screen is large and in charge, 4.3 inch screen and its huge, its hi resolution and its awesome. I wondered if I would like the screen being this big, the answer, yes I do. It makes every app like 10 times better because it is nearly double in size sometimes. Its clear, you can read 100% of what you want to. The screen may be one of the better parts of this phone, well other than the stuff I just mentioned. Watching youtube hasn’t been this good since a computer. Youtube on the go on a huge screen, just perfection.

The battery is a Li-ion, 1500 mAh. It needs to be bigger, the only one negative thing I have to say about this phone is that if you want it, which you probably should want it, you will need a charger that travels with you, two batteries, or an extended life battery, it lasts less than nearly any phone I have played with and I have used a few. They just did not do a great job with the battery here, such a big devices uses SO much power and it can not be contained with the battery it has within it.

This phone came out of the box with an update, it already had 2.1 and they updated to fix something. It looks good with 2.1 as well, really good. 2.1 Sense UI might I add. The Sense UI only makes this phone better. I had never used 2.1 sense before this and I must say, I am liking it. Its pretty sweet.

This phone is another that has Sense as I mentioned. Its pretty amazing. Sense 2.1 on a big screened phone just reacts nicely, in a way it is more of a laptop than a phone and I find it to be awesome. It just works correctly. Sense with all its various themes and widgets ends up being perfect for this phone. Also inside this phone is a 4G add on widget, you can flip it and if you have 4G in your area, it will start to work, if not it searches for it a lot and drains the battery. When I found 4G it was faster! I am hoping to be able to review more Sprint phones next month after my area has 4G.

Sense fills the phone with widgets, friend stream, a new calender, more twitter apps, it links facebook, twitter, flickr and more all into your phone and thats stock sense ui. Thats stock 2.1. There are sooo many more widgets in this phone and sense makes them flow, really well. The sense ui widgets can be used like apps in a way, they can be pushed up and down within the widget, with out opening a new app you can swiftly flip through your friend stream or check whats going on here and there.

The virtual keyboard is kind of cool, the sense ui IME, white on grey, not too bad! There is no physical keyboard on this phone, but it doesn’t matter, the screen is big enough that you feel like you have a physical keyboard with you, you turn the phone side ways and start to type and when you need both thumbs to type, it feels like a real keyboard. I ended up getting the droid x keyboard and it worked EVEN BETTER, I hope that HTC can make their next keyboard like this.

The browser is awesome, its similar to the stock 2.1 browser on any other android phone, but then they throw sense ui in and it just makes it that much better. I like browsing the web on this phone, its fast and easy plus you get flash lite, not flash 10.1, don’t confuse the two of them. The camera is awesome, 8mp, CLEAR as day pictures, not only that but the lens is pretty big, it grabs a lot of light and takes a great picture. The video is similar, clear awesome 720p HD video. It shows on youtube and qik! It also shows on the robo.to app, I use the front facing camera and still get a GREAT video even though its merely 1.3mp. The camera app is cool, not like others. Its also built with sense ui in mind.

Great calls, no complaints, sprints network is great. They went through every time, crystal clear and I never dropped a call in two weeks, talked to my wife a fair bit and called some friends. Got great reception!

If you want great phone, next generation and just don’t want to go with the iPhone, or are looking for something that compares to the iPhone4, this is it! Its bigger, you can use the front camera with 3g, 4g or wifi. The cameras are sweet, both of them, the one on back is huge and takes in tons of light, the one on front is perfect for shots of yourself, you and a close friend or whatever you may want to use it for. Robo.to and qik are both great on this phone. Both are fast and work with the front facing camera quite well. I have had so much fun with this phone and do not want to send it back to Sprint. This phone could replace my other phone right now, I never wanted a phone with out a keyboard, however, with this screen size I could definitely do it!