The Overbite Project is an open-source effort to produce browser plugins and client applications that enable support for Gopher, an early network protocol that preceded HTML and the contemporary World Wide Web. The lead developer behind the project is retrocomputing enthusiast Cameron Kaiser, one of the few remaining champions of gopherspace. His latest undertaking is a mobile Gopher client for Google's Android operating system.

The Overbite application for Android is still at an early stage of development, but an alpha release is available for users who want to help test the software. I installed it on my Nexus One smartphone to see the primordial protocol in action on Android. After installing the application, I was able to view Gopher content on the Internet.

Overbite is a stand-alone application, but it is designed to integrate well with Android's Web browser. Overbite registers itself as a handler for the gopher protocol, which means that it will launch automatically when you click a Gopher link in the Android Web browser. Overbite also allows you to input a Gopher URL manually. I tested it by visiting several popular Gopher destinations, such as Thomas Thurman's Gopher interface to Reddit. 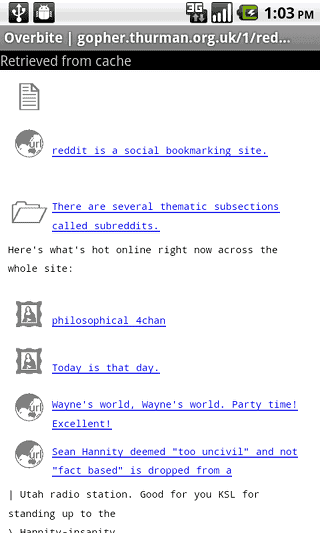 The charm of Gopher is that it offers a consistent navigation paradigm and a lightweight content delivery format that eschews noise and distraction. Although it has largely fallen out of use, Kaiser believes that it still has a role to play alongside the conventional Web. He says that the protocol could still be particularly useful on some mobile devices like feature phones, where bandwidth constraints and limited presentation capabilities make the full Web impractical.

"Frankly, I think that Gopher's niche in the future may be in the mobile space," he told me in an e-mail. "Rather than coming up withthings like WAP, why not go with a protocol that already exists, is simple to implement, is not constrained by licensing, and already has content out there to peruse? Particularly for feature phones and the like, the menus that service providers foist on users as 'the Internet' are pretty much the same things Gopher offered in 1993!"

He is hopeful that interest in the protocol will grow when people become aware of its performance advantages in low-resource computing environments with limited bandwidth. The Overbite Android client is one way that he is working to raise Gopher's visibility. A Mobile Firefox add-on and a native webOS client are among his plans for future Overbite implementations.

You can download the APK file and the source code from the Overbite website. Kaiser says that the program will eventually be available through the Android Market when it is ready for widespread use. The code is distributed under a BSD license.