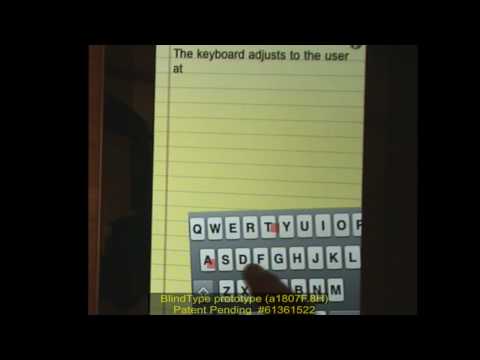 After watching this promotional video of BlindType – another alternate keyboard making its way to Android – I think I can safely say I'm not that into you anymore. It's not you, it's me. Your cunning ability to let me draw while I type and still get some words onto the screen is still amazing, but I think you might have just been outdone. Just a tiny bit.

Now that I've gotten that out of the way, I'll say that I won't be surprised to learn you guys have said the same thing. BlindType looks awesome in every way, shape, and form. With their keyboard, text prediction is so accurate that – in some cases – you could type with your eyes closed. They even have a mode where you can turn the keyboard invisible and type on an empty canvas. That's just stunning. Another feature that I love about the keyboard is that it will auto adjust its size and orientation based on how you're typing. If it notices you're way off, it'll line itself up for you. Even at the smallest of sizes, the keyboard seems to be extremely accurate. There's not much more to say here, because the video speaks wonders for itself. The version pictured is for the iPhone, but BlindType's announced they're working on an Android version as well. What more can I say? Go on over to their website if you want to learn more.

Advertisement
Advertisement
Trusted By Millions
Independent, Expert Android News You Can Trust, Since 2010
Publishing More Android Than Anyone Else
9
Today
9
This Week
10
This Month
4775
This Year
106252
All Time
Advertisement