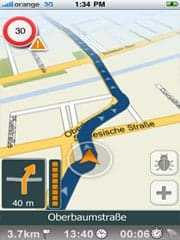 Rejoice, the satnav fairy brings you blessings!  For those of you in the lands of Google Maps Navigation and 1.6 or higher device have probably been using Google's own turn-by-turn navigation.  If not, you should.  Only last month they added new functionality for a bunch of European countries and Canada in addition to the already supported UK and US.  It has amazing functionality and is built right into Google Maps.  You can even make a voice command like, "Navigate to Joe's Pizza," and it tells you where to go.  The best part is that it is free.

If you want an alternative however, try Skobbler.  There are a bunch of new features like speed warnings and it displays road signs on screen.  It is available now in the Android Market.  So what is cool about it?  First and foremost, it also is free.  It is actually free in more ways than one.  It uses the maps from OpenStreetMap, which is an open-source, free as in freedom, map database.  This jives well with the open culture of Android.  The only problem, like that of Wikipedia, is that the maps are user-uploaded and user-updated.  This means that OpenStreetMap is not to blame for incorrect data.  That said, if it is like Wikipedia, it is quite possible that it is more up to date than other sources such as Google Maps.  Also, you can report errors and improve its functionality.

The Skobbler website is a bit unclear as to which countries have it for download in the Android Market.  It lists them as D,A,CH,RO & UK.  I am pretty sure that includes Germany, Romania, and the UK.  I am not so sure about the A or CH.  There will be more supported countries soon.  If you've tried it out, let us know in the comments!