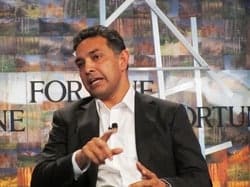 Sanjay Jha, co-CEO of Motorola said this morning he was convinced that vast majority of volume in mobile devices over the next five years would be with Android devices. Answering a question about Android vs. the iPhone at Fortune Brainstorm Tech, he said he thought it was possible that what happened with the PC, with Apple an early leader but a standard OS become most of the market, could end up happening again with phones.

He didn't directly answer a question about whether Motorola would introduce a tablet, but said he believed there would be a lot of different devices.

He said he didn't think the OS was the only reason people bought a device, but said it was very important. But he said things like design, form factors, and applications mattered as well. For instance, he said 30 percent of people will not buy a phone without a QWERTY keyboard.

At the conference, he talked about the company's move to Android handsets and how it has helped turn around the company. He said when he took over, the handset development group had had seven presidents over the past four to five years. He said he wanted to install a "sense of crisis" and then decided to focus the business on smartphones and Android, rather than a focus on overall market share.

Jha talked about how partnerships were crucial in improving Motorola's fortunes. Verizon wanted a big hit phone for its network, Google needed a hit product for Android, and Motorola needed a success. Later, Adobe joined because it became clear that Flash is an important part of the mobile platform

He talked about how he knew Android's Andy Rubin from back when Rubin was running Danger Inc and Jha was at Qualcomm. Later, Qualcomm worked with Android to create the first Android phone. And now the Motorola and Google are working very closely together.

There is a core difference of opinion, he said. Google wants more standardization and to support a broad environment, while Motorola wants to differentiate its devices. But the companies knew that going in, and it hasn't stopped them from working together.

Asked whether Motorola would someday create its own operating system, Jha said he thought Android was very meaningful for Motorola. But he said it believes there will be "more than 3 and less than 7" long-term mobile operating systems; and that Motorola wouldn't do its own unless it throught it could build a big ecosystem around it.

He talked about how Motorola was being split into two companies, and how his division would now have no debt. He said that he saw synergies between the set-top box and the handset devices, and said to expect products that linked the two by next fall.

He talked about converged devices — mobile phones with entertainment and Internet features — are much more transformative than people realize. He said mobilizing the Internet is as important, if not more so, than the Internet itself, because it brings the Internet to more people. He believes these devices will end up recording your whole life.

Responding to a question about mobile commerce, he talked about things like mobile payments and couponing in the west, but said the business momentum was not there yet in the U.S. He seemed more bullish about the potential for using the phone for transactions in emerging markets.