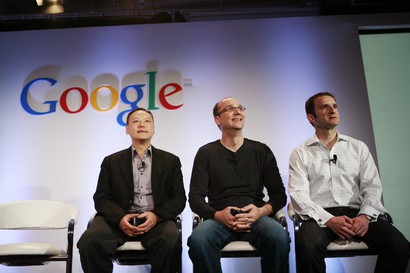 If there was any question that the feud between Apple and Google is here to stay, here's a hint that could lend some insight: The latter is reportedly in talks with the Harry Fox Agency to license music for sale.

And in an indication that the tunes are headed for mobile devices, spearheading the negotiations for Google is Andy Rubin, the Vice President of Engineering who oversees the development of the Android mobile operating system.

Apple has been rumored to be considering making a customer's full library of music available on-demand from any compatible device, meaning you could listen to selections stored on your home computer on your iPhone, or vice-versa.

Google has long been a leader in such "cloud" based services, where data is stored in Google data centers so it's available anywhere you can get online.

Primus Warms Up For National Tour

Apple and Google having been trading barbs for over a year, when Google released the Android OS to compete with Apple's smartphone products like the iPhone.

The iPhone OS, now known as the iOS, also runs on Apple's iPad, and Google has been reportedly looking to Android as the software to run everything from a competing table-based computer and for interactive television, a la the Apple TV.

The animosity and competition also came in the wake of Google CEO Eric Schmidt's resignation from Apple's board of directors after the Federal Trade Commission started looking into anti-trust complaints.

A music store from Google would also face competition from Amazon and Wal-Mart, however Apple's iTunes Music Store is the biggest — and most lucrative — kid on the block.

According to the anonymous sources cited by the New York Post, Google could open an online music outlet in time for the holiday gift season.

Jackson West figures anything has to be better than the current Google Music offering.