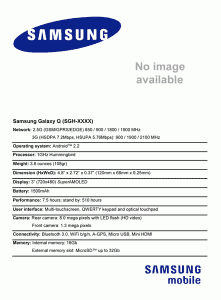 Last month we ran a story about the front-QWERTY keyboard Galaxy Q phone that Samsung reportedly plans to add to their Galaxy line. More specs have now leaked out about the likely BlackBerry competitor.

The Samsung Galaxy Q will have:

Since it is being touted as a BlackBerry competitor, it will most likely have the screen up top with the keyboard directly below. It sounds like a very intriguing phone, and it will be interesting to see how many BlackBerry users may be swayed by the Galaxy Q.