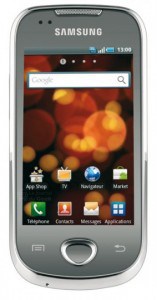 Two identically specced but differently cased versions of the Samsung i5800 line have shown up in France as successors to the Samsung Galaxy Spica (i5700). Orange France gets the Samsung i5801 Galaxy Naos, available in black or white color schemes, for as cheap as one euro on certain contracts. The rest of the carrier-space will get ahold of the standard issue i5800 now called the Samsung Galaxy Teos.

Either way you slice it you're getting Android 2.1 with Samsung's TouchWiz interface, a 667 MHz CPU, 3.2-inch 240—400 resolution capacitive touchscreen, and a 3MP camera. In some areas these specs are actually downgrades from the Galaxy Spica and its 800MHz processor and 320—480 resolution display. The difference in performance or usability might not be missed by the part of the market the phone is aimed towards, though we wouldn't call the Spica or its predecessors anything to get too excited over. We're a little more interested in the older brother of these handsets, the Galaxy S, but it's nice to see Samsung continuing to expand their Android presence.