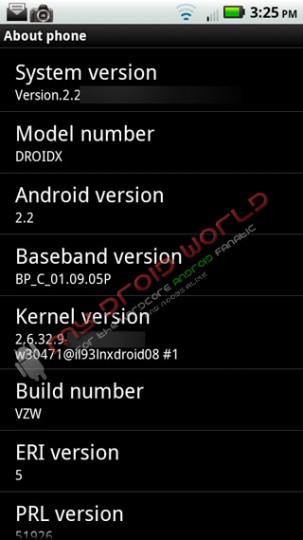 We're all eagerly anticipating the release of Android 3.0. That's just the truth. But, that's not stopping everyone else from looking at Android 2.2 and when it's going to launch on the Droid X. When the new flagship device from Motorola and Verizon was announced, speculation about it launching with Android 2.2 was pretty high. Of course, we know now that it's running Android 2.1, with a date "some time in July" aimed for its update to Android 2.2. (Thankfully, August is in the Summer.) But, that's not stopping the developers. And, considering the Motorola Milestone just got Android 2.2 goodness, why shouldn't the other eFuse-based device get it, too?

Sadly, there's just a screenshot at this point. And yes, it could be fake. But, considering the weight behind MyDroidWorld and their development community, we'll go ahead and give them the benefit of the doubt at this point. So, yes, that's a Droid X running Android 2.2. We're sitting on the edge of our chairs just waiting to see any more details about this, so hopefully you'll wait with us. As soon as something else comes to light, we'll be sure to pass it along.