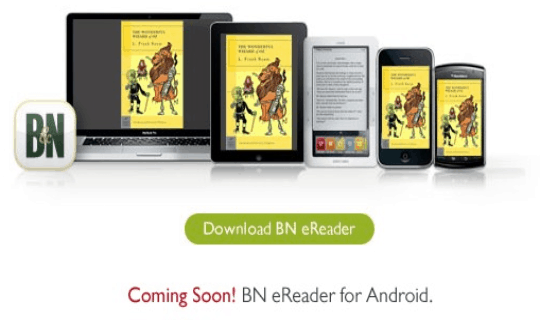 Well, well…what have we here?

I've just received an email from Barnes and Noble asking me to (for a limited time only) start my eReader collection for free by downloading several books from their classic collection. This, of course, is not news in and of itself, but upon scrolling down to the bottom of the email, I had confirmed what I had been suspecting for a few weeks now: Barnes and Noble will soon be releasing an eReader app for the Android platform.

I for one am very excited about the prospect of having every type of eBook I could possibly want right on my Android device. Where I think this will really benefit Android users in the future is when the 10â€³ Android tablets start to hit the market en masse. I know this is enough to get me to hold out for a tablet rather than spring for a Nook or a Kindle.

So readers, are you as excited as I am about the plethora of choices now available for Android? Let us know in the comments.