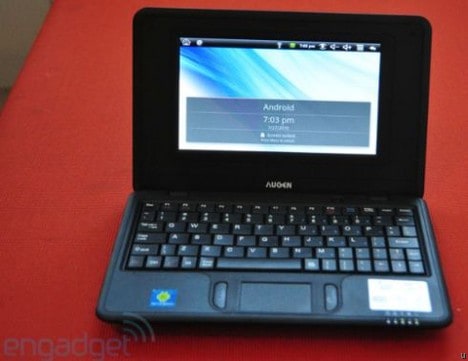 Engadget went to K-Mart and found this attractively priced “smartbook” while cruising the electronics department. But other than the price and the (very) light weight, they were not amused.  This 7 inch device has Android 1.6 (Donut) installed, but their reviewer had little success downloading much from Android Market or the “Apps Store” to the Genbook.

With a 400 MHz CPU and a whopping 128 MB of RAM (remember when that was actually impressive?), slow is the word.  Actually Joanna Stern said “really slow,” as in a minute and a half to boot up.  Some pre-installed applications didn’t work, and others quit when the machine was asked to do too much.  Playing an MP4 video was “too much.”

One piece of good news: three USB ports so you can plug in a mouse, or maybe a larger keyboard, or a more powerful Android device.

Stern also noted that the computer seems rather like the 7 inch CherryPal netbook, which also ran Android and also failed to impress.

Read the full review at Engadget. They have a video, too.