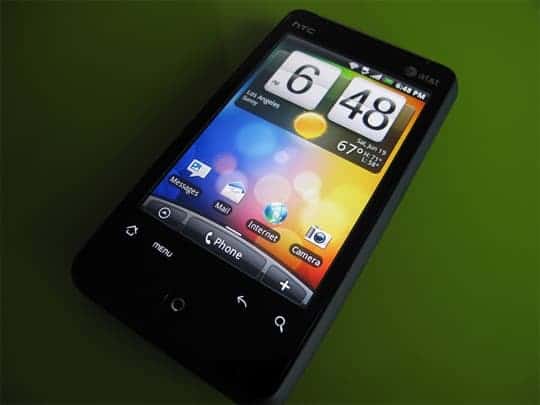 AT&T has been notably absent in the Android game, offering a pitiful offering of phones with the exception of the Nexus One… but that's not really offered by AT&T. Fortunately for those AT&T users out there, there's finally a crop of pretty good Android phones coming up, including today's review: The HTC Aria ($130 with a two-year contract) finally brings a great entry-level (and beyond) Android phone to the Google-challenged carrier.

The very first thing you're gonna notice about the Aria is its compact size. In a world of ever expanding screens, HTC decided to go small with the Aria. Measuring 4.1 x 2.3 x 0.46 inches and weighing a mere 3.8 ounces (that's with the battery in there), most mobile enthusiasts would scoff at the Aria. But as an entry-level phone, it's awfully pretty, awfully small (sometimes we forget a major point of having a mobile phone is portability), and awfully light.

You've seen the pictures comparing the HTC Aria to a deck of cards, and that's exactly what it feels like when you hold it in your hand. It's tiny! I've got an EVO, though, which makes most phones look dwarven. Here's the EVO, an iPhone 3GS, and the Aria in a side-by-side comparison: 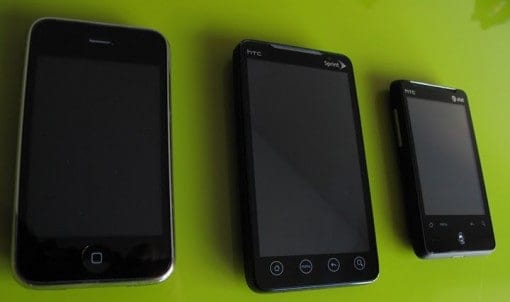 I absolutely love HTC's choice to round out the sides and continue the matte finish all the way to the screen. It makes it incredibly easy to hold – you won't be afraid of dropping the Aria while it's in your hand because of that choice.

That being said, it's not nearly as easy to take off the back cover to get to the battery. That might be a good thing for some, but I personally prefer a little more ease in removing the battery cover. As a side note, there's a lovely shade of sports car yellow under the hood of the Aria. Being a geek, I notice and appreciate this small, eaningless detail, mostly because it's cool looking and gives me something to show my non-tech-savvy friends. "But look! Underneath it's yellow!" "Ooh."

The HTC Aria has some style under the hood.

On the front, we've got the HTC standard capacitive buttons for Home, Menu, Back & Search, as well as an optical trackpad (welcome due to the Aria's smaller screen). It's a good-looking phone.

Display So, there are a lot of larger, higher-quality screens out there right now, but the Aria's 3.2 inch HVGA screen shows off HTC's Sense UI nicely. The screen is crisp and clear, even at lower brightness settings. The capacitive touch screen responds swiftly. Other than that, it's your standard fare.

Camera Here's the deal: I've come to demand a flash on my cell phone cameras. Not being able to take pictures half of the day seems absolutely insane to me – especially if you're a night owl. The 5 megapixel camera does its job just fine in daylight, but no flash really puts a damper on the camera for me.

To an entry-level smartphone user, it might be forgiven, but no flash these days is heresy, especially for those of us who don't like toting around a myriad of media gadgets. The VGA camcorder is decent enough in the Aria's price range, but nothing to write home about.

Here are two un-retouched comparison shots of the Aria (top) and the EVO (bottom):

You can see an obvious difference. The EVO's colors are richer and the image feels more robust and dynamic, though the Aria seems to show more true-to-life color saturation in its image. Interestingly, however, the EVO's image has a little more noise in it than the Aria's.

Storage So… I'm not exactly sure where someone made this decision along the way, but there's a piddling 2GB MicroSD card included with the Aria. I am seriously disappointed in that. Most people have an iPod Nanos with larger storage capacities. Obviously, the solution to this issue is to buy a bigger MicroSD card (up to 32GB), but if you're dropping $130 already on this phone, I'm not sure you're gonna want to immediately turn around and spend more to make it mid-level functional in terms of memory.

Speaker/Sound The sound quality was okay, though I admittedly live in an area where AT&T's 3G coverage isn't fantastic. Out in Santa Monica, though, the phone made crystal clear calls (though when the wind acted up, I could hear it blowing into the mic, which I'm not a huge fan of). I have to say that I'm a bit jealous HTC included a beautiful little hands-free headset with the Aria that looks and sounds fantastic while driving around Los Angeles, not to mention works great while working out at the gym – where did that hands-free go for the EVO, HTC? The music generally sounds great, especially for such a small phone. Once rooms got crowded, though, it was definitely struggling to cut through the noise. But it's not a deal breaker.

Battery Life The battery life on this little bad boy is pretty nice – I had the phone for two weeks to review, and got a couple days of basic use out of it. Using it heavily (I'm talking bringing it out of sleep every 5 minutes and playing around with it), I got about 5-6 hours out of it. There's a 1,200mAh battery in there, so you've got some room to play with in terms of time. It's very, very efficient.

Obviously, we're all Android fans here, which means we're also crazy about 2.2 (Froyo). But I'd be selling the Aria short if I didn't mention how nicely 2.1 (‰clair for those of us pastry-minded users) works on it. It's smooth, and I never had an issue while browsing, playing music, or playing games. Even though we're all becoming rapidly used to a 1GHZ Snapdragon world, Android screams on the Aria's 600MHz MSM 7227, 512MB of ROM and 384MB of RAM. Really. When I put it through its paces, not once did I experience any notable lag. This little phone rocks.

It's with great sadness, however, that we mention the dark side of the Aria. By no fault of the handset itself, its carrier AT&T has decided (like they did with the Backflip) to completely cut off third party, non-Market apps from the Aria. That's right, ladies and gents. No Swype for you, at least not until it shows up officially in the Market. As a die-hard Swype user (I will never use a virtual keyboard phone without it), this is unacceptable.

I get that AT&T says it's to keep their customers safe… but let's get real. If you're sideloading apps from third-party sources, it's a good bet you know what you're getting into. This is SO depressing, AT&T! Why would you remove something that's not even auto-enabled in Settings upon getting the phone? Most people who will pick up the Aria won't ever poke around in there, and even if they did decide to enable sideloading, the message about the dangers of loading third party apps would likely scare them off well enough to disable it again. Sheesh.

If you're dying for an Android phone on AT&T, and you're a serious enthusiast, then the Aria is not for you. The Nexus One is. That being said, if you're an entry-level smartphone user who doesn't care about sideloading third-party apps or taking pictures with a flash, then the Aria might in fact be for you. I can't for the life of me understand the price – as a $130 price tag might be too steep for a phone that's been kneed in the nethers in terms of Android, especially combined with the news that phones under 1 GHZ likely won't be seeing Android 3.0 (Gingerbread). Sense UI tends to upgrade a lot later than other Android phones (so no 2.2 in the foreseeable future); and the iPhone 3GS got a super competitive new price point ($99) when the iPhone 4 launched. It's not 'crippled,' but it sure ain't the open source heaven us Android geeks know and love. Maybe 'hobbled' is a better word to describe what AT&T did to a perfectly capable
smartphone.

I can see someone like a mom, or a stylish yet non-tech-obsessed friend picking up the HTC Aria because it's somehow adorable and totally sexy at the same time – but anyone who's really into Android (or loves to have the latest and greatest) will pass on it. Which is a damn shame, all things considered. I think AT&T had a big chance to make the Aria a competitor in the hotly contested $99-$149 bracket, but blew it with the choice to remove the third party apps option. I guess we'll be waiting a bit longer for a true, non-Nexus One Android option on AT&T (I'm looking at you, Samsung Captivate). Unfortunately, it'll likely still be hobbled by AT&T's decision to remove the option to enable third party app installation.