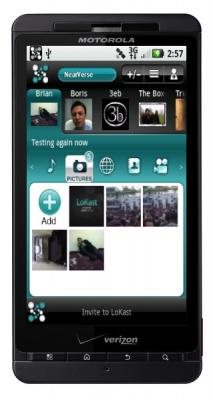 LoKast has brought its proximity-based application to Android. Rejoice! Available for the iOther platform since March, LoKast allows you to find, connect and share with other LoKast users in your local (300-foot) area via 3G, WiFi and Bluetooth.  Not only fans and users are getting in on the fun, but some familiar names in the music industry are behind the project.  Shameless plug for Echo and the Bunnymen goes here.  â™«â™ª Lips like sugar….â™ªâ™«

Maybe the best part about LoKast coming to Android is that little thing we like to call "cross platform."  You can freely connect with users on their iPhones as well as Android phones, and that kind of forward thinking can only help Android and the Market as a whole.  Hit the break for the press release, a couple videos, and download links.

LoKast by NearVerse for the Billboard Mobile App Awards

LoKast Launches on Android, Creating a Cross-Platform Proximity Experience in the Palm of Your Hand

(New York) – July 21, 2010 – Today, NearVerse is launching its popular proximity-based music and video-sharing app, LoKast, for Android devices.  Already a popular app on the iPhone, LoKast for Android enables users to discover music, pictures, videos, contacts, and web links of users who are together in location. The app is optimized for background operation, now that both Android and iPhones using iOS4 allow for apps to work in the background. LoKast is the first app to use background location to create a real-time proximity experience, going above and beyond just 'checking in' to locations.
LoKast, short for "local-casting" is eliminating the need for physical media sharing, making CDs and DVDs obsolete, and allowing users to share media instantaneously, without having to wait until they are back at their computer to experience the content.

LoKasters share selected parts of their digital profile with those in close proximity who are also using the app. The app allows users to discover and publically view available digital profiles of others in the same venue, similar to browsing for Facebook profiles, but targeting those who are physically around them.

How LoKast for Android works:

Just download the free app from the Android marketplace and start adding your own content that you'd like to share. Launch LoKast on your Android and then let it operate in the background when you're not sharing media actively.

When you come into proximity – 300 feet – of another users LoKast will automatically discover their profile and you will be able to view and download their shared content.

LoKast will benefit greatly from the background location and multitasking available on the Android, making discovering people 'LoKasting' around you easier than ever.

"The fact that Apple and Google have enabled apps to operate in the background has made our service instantly more useful from a content discovery perspective," states co-creator Boris Bogatin, CEO of LoKast's parent company NearVerse. "Previous to background app enablement, LoKast was primarily transactional with one to one media sharing, now LoKast is truly a proximity discovery experience."

LoKast has also been embraced by the music industry as a digital stage to compliment live performances and for the sharing of exclusive content between performers and fans.  Over forty artists are using the service at summer concerts across the country including New Kids on the Block, Third Eye Blind, Echo and the Bunnymen, Infected Mushroom, The Boxer Rebellion, The Ruse, Truth & Salvage, VICIO, Shooter Jennings, Fair to Midland, Nonpoint, Jets Overhead, Bazaar Royale, BlackMahal, Balºn, DJ Sun, Mark Farina, Salvator Santana, Scott Hardkiss, Soulstice, The Pimps of Joytime, and Katia. Other companies in the movie and telecom sectors have seen LoKast's success in the music industry and are looking to NearVerse to help them integrate proximity networking and location backgrounding into their platforms.

NearVerse is a proximity Internet company.  Through its LoKast app, NearVerse enables users to discover and interact with others that are in-location within 300-1000 feet of them, in real-time.  LoKast has been downloaded by hundreds of thousands of users, and adopted by many emerging music bands as their proximity music experience platform. NearVerse is now working with various provider partners, including media-centric providers and branded publishers, application developers, and carriers, to extend their offers with the LoKast proximity platform.  LoKast proximity platform is powered by NearVerse's proximity Internet and networking technology that supports real-time and high-precision proximity discovery of users and content, high-speed data transfer and content delivery that's 5-10x faster than that of 3G networks, and rich immersive media experiences.