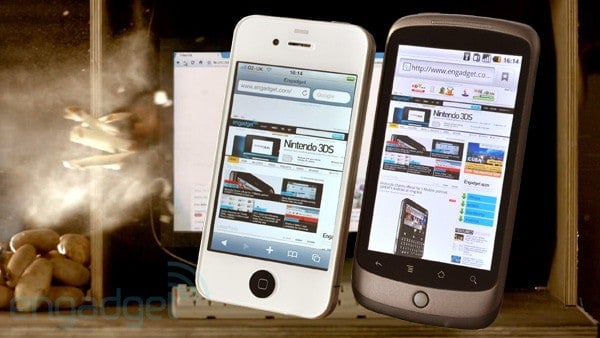 Back in may Google claimed that Froyo would boast the worlds fastest mobile browser and then demonstrated it in action. No real tests have been able to be made until recently though as the final software version wasn't ready. Well it appears that we aren't going to be disappointed. Ars Technica's benchmarks have shown that Froyo's browser is three times as fast as Eclair's and two-fold faster than iOS 4's browser. But benchmarks don't always mean much in the real world, especially when one device has flash and the other has been denied one of the most used parts of the internet. So here are the results of a side by side test.

The test devices here are a 16Gb iPhone 4 and a Nexus One running the Official OTA Froyo and flash 10.1. All cache files were emptied, before each test. Five desktop websites were tested and three of these five (BBC News, gdgt, and The Onion) repeatedly tied in load times. Engadget loaded 2-3 seconds faster on the iPhone and the New York Times loaded about 2 seconds faster on the Nexus One. See the Video below:

Next the same sites were tested with the out flash loaded on the N1 and as it turns out yes it is faster than the iPhone 4. Four of the sites loaded faster on the N1 and the BBC was the only one that produced a tie. So what next Apple?