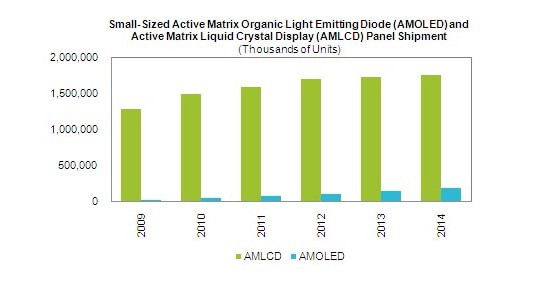 While Samsung's confident that the steps they've taken to eradicate this dastard AMOLED shortage issue are sufficient to spur production in the next year (with their newly-designed and soon-to-be-built $2.2 billion expected to see birth in 2012), other parties – like iSuppli – would say otherwise. According to a recent report released by the firm, the steps Samsung are taking to get rid of the shortages won't be enough for the short term, stating that the problem could last until 2014 onward.

Even if Samsung are able to turn things around in just a couple years' time, it doesn't help that AMOLED technology would first need to be pumped right back into the production of their own merchandise before letting others – like HTC – get a healthy amount. AMOLED is a great display technology, but it's virtually useless if you can't keep enough of it to bring your supply up to the demands of many impatient customers in the market for products that use them.

These are just predictions from one research firm, so we can't take all of this word for word and number for number, but – as has been echoed for quite too long now – there clearly is a problem that doesn't seem to be going away as fast as we'd like. HTC's recent switch from AMOLED to LCD in the HTC Droid Incredible is a prime example of that in the Android world, and other manufacturers' reluctance in equipping their latest and greatest with the display technology screams just as loudly.