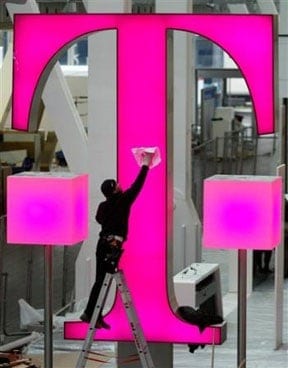 Every year, the financial site 24/7 Wall St. compiles a list of 10 companies they predict will cease to exist in the coming year. This year, they've chosen T-Mobile as one of the companies that is going to bite the big one in 2011. Before you start scoffing, their logic seems pretty reasonable.

For starters, T-Mo is the 4th largest carrier in the United States with roughly 34 million customers. This doesn't mean much until you consider the numbers; the next largest is Sprint with around 18 million more customers. Holding the number 1 spot is Verizon with a whopping 97 million customers. T-Mobile seems almost quaint by comparison. The only major companies T-Mobile is larger than is the pre-paid service Trac-fone and US Cellular, with 15 million and 5 million customers respectively.

As for revenue, in 2009 T-Mo had a profit of $306 million. Not bad, but that figure is also $177 million less than what they reported in 2008. The reason for this? There are no clear signs, but the fact that T-Mobile didn't have a "wow" phone like Verizon did with the Droid is one possible factor.

If the prediction comes true, 24/7 Wall St. says it's highly unlikely T-Mobile will simply close it's doors. A much more realistic scenario is that T-Mobile would be bought out and absorbed into another company. A possible buyer could beSprint, who already owns the Virgin Mobile US brand. Combining the 2 companies could push Sprint into the #2 spot, beating out AT&T.

But, this is all just speculation. To further illustrate that, just take a look back to 24/7 Wall St.'s 2009 list- when they predicted Motorola would close.