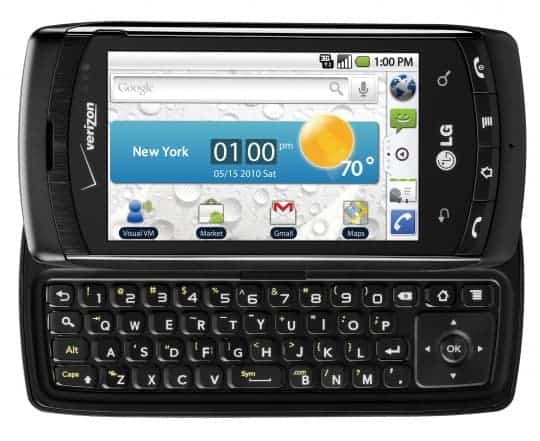 This phone was one that I wasn't sure if I was excited for, I hadn't heard as much hype as some of the other phones plus I just have a bad taste in my mouth, ANTI LG. I had a few bad phones from them and wasn't sure how this one would be, let me just say, as you read the rest of this, you will see how positive things got.

Taking it out of its very small box, I was impressed, its curved, feels right in your hands. Its a sleek looking smooth phone and has a very good look. The buttons at the bottom look and feel great and work as they should. Turning on the phone I noticed a big spot on the top right corner, found out later that its a HUGE LED notifications light. Its nice having one that big.

The phone comes 600 mhz stock. It also has a nice 3.2 mp camera and it all works nicely. It has 512MB of ROM and 256MB RAM and it performs quite snappily. There is a 4gig micro sd card that comes pre installed with this phone it is very useful as well. It also comes with a 3.5mm headphones jack instead of the headphone jack/charger solution that some phones are rigging up. It weighs in at 5:57 oz.

The screen is nice, built with the same glass as the Moto Droid and even though its a bit smaller than some phones it still provides an 800pixels by 480 pixels display that is just awesome. Live wall papers and pictures look great on this phone.

The battery is a 1500 mAh with Up to 450 mins or Standby Time Up to 500 hrs. Its been living up to its good battery life, seems to last the good part of a day, mind you I am a HEAVY user! Two twitter accounts that update every two hours, phone calls off and on, text messages, two accounts that sync all the time both contacts and gmail. It does a lot!

This phone has 2.1 in stock. It comes with android home and LG home and both are pretty cool, the LG home is a tad different than android home. 2.1 is not a broken version either, it has the 3d app launcher as well as live wall paper and the works. I am pretty amazed that a 600MHZ processor is running all this, however, due to the processor, it does not run the air runtime that is out yet.

I mentioned LG Home before, its the different thing here. It looks different but does not act much different. It comes with 4 icons at the bottom kind of like the helix launcher or the launcher pro. I like this feature.

A lot of custom stuff here, the camera is different and LG has thrown in its own special widgets, one for weather, one for calender, socialite for social, an alarm clock, a dual clock, and its own messaging widget. Seems pretty cool that they would put some extras in to spice up the phone a bit and it definitely does.

The physical keyboard surprised me here! It is a tad different! The space bar is not below all the letters its in there with them. Right in there with the bottom row of keys, it is a qwerty keyboard. It is pretty easy to use but takes some getting used to with the space bar in there. Some other nice/cool things about the keyboard is that the directional pad is PRETTY big, and there is a home and menu button on the keyboard, they are both physical buttons and not secondary so there is no alt and home or alt and menu, just menu and home. I liked that a lot.

The browser is nice, just as fast and good as the rest of the browser and nothing really special added in for this phone, its stock android 2.1. That being said, great browser. The camera and video camera parts of this phone are a bit different than normal but not any harder to understand, just a different look and it does look nice, I like it when they change the camera up, its just little things like that which impress me.

The calls are good as ever. Used this phone for calls for a straight week and had no problems understanding anyone or them understanding me. Just works nicely.

Great phone, by the end of the two weeks I am sold! The phone feels solid, its a good weight, it feels good in your hands and works well. Its another successful android phone that does a great job. I am pleased with android and have yet to use any that I haven't liked much. They are out there, but they are few in numbers. This phone is NO different. Glad that LG was able to get their hands on android and give us their version. If you see this phone, don't be like me and think its just another LG phone, its different, its an LG Android Phone.