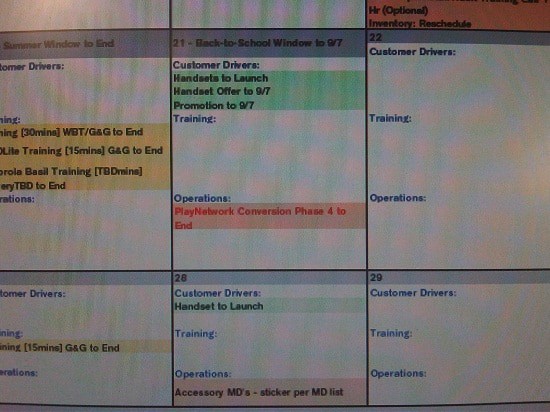 A recently leaked T-Mobile training calendar reveals that T-mobile has some suprises up their sleaves. According to the training calendar the 21st and the 28th handsets are supposed to launch. Now its a pretty safe guess that the Samsung Galaxy S will release on the 21st as that is what many have already thought. This calendar just makes that possible release date more credible. We don't know what the release on the 28th will be, we don't even know if it is an Android device. With the momentum that Android has gathered recently, it is verly likely that it is indeed an Android device. The only way we can know for sure is to wait, and see what happens.

On top of these handset launches it looks like T-mobile will be introducing a 3,000 minute plan on both Even More and Even More Plus Family plans among other things. One thing is certain though, based on this calendar it looks like T-Mobile is getting ready to seriously compete with other service providers.
Advertisement
Trusted By Millions
Independent, Expert Android News You Can Trust, Since 2010
Publishing More Android Than Anyone Else
0
Today
186
This Week
106
This Month
4093
This Year
105570
All Time
Advertisement