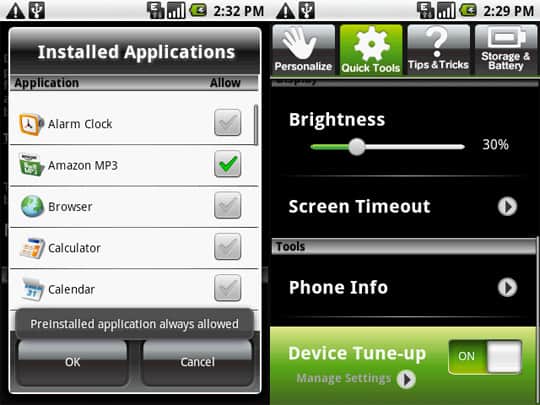 Many people claim that Android task managers are pointless and should not be used, but T-Mobile thinks differently. The carrier is beta testing a new program called Device Tune-up that will eventually be integrated with their My Account application (which ships on all T-Mobile Android phones).

If you are on T-Mobile and want to participate in the beta, then head over to their official forums. The beta is open for a limited time and it's on a first-come basis. The app should run on all phones running Android 2.1 or earlier and it requires an official firmware (no custom ROMs are supported).

I would really love to hear how Google responds to this since I've seen several members on the Android team speak out against task killers. Users really shouldn't need an extra task manager and Android 2.2 actually includes a built-in feature that displays running services and allows you to stop them.

However, I've definitely experienced several poorly coded apps that constantly run in the background and eat up my battery. An experienced user can normally identify these apps and uninstall them, but I understand how the average user might have no idea what's going on. I can also understand why T-Mobile would want to kill these rouge apps that are unnecessarily running and sending data that clogs their network.

I've been trying to install the application, but I have had no luck so far on downloading it to either of my T-Mobile phones. Please sound off if you have tried out the app and let us know what you think.

"Device Tune-up is different from most task killers because it does not require you to do anything. Device Tune-up will default to 'on'.  While on, Device Tune-up proactively closes services to help the device and battery perform at their best. Most pre-loaded applications will not be affected by Device Tune-up. For our non-technical users, this may mean you never even realize Device Tune-up is running; your device may simply run better."