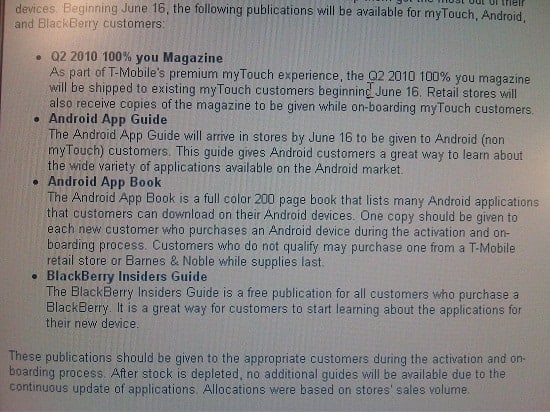 Android is changing and is full of surprises from one day to the next, especially since it made it's debut on the HTC Dream/T-Mobile G1 and back in those days, you were given a small pamphlet saying that there were lots of apps available on the Android Market. Now, thanks to some handy-dandy screen capture snatching, an internal document was snipped for T-Mobile that shows  that the big Magenta has plans to make a guide book of sorts for Android and it's thousands of apps available. This book lists the most popular, most useful, applications available to help all those new to Android how to get around and really make their phone and OS their own.

This book really will be a book, bound and all, not a pamphlet, and will be free to myTouch buyers at the time of activation or you could just check out your local T-Mobile store or Barnes and Noble stores. The supply of this book is limited because of how rapid things can and do change for Android, and with good reason too. Maybe this will be a sign of things to come. Barnes and Noble has tons of books about PCs, iPods, iPhones, and now hopefully we'll see some literature, guides, and reference material for Android.