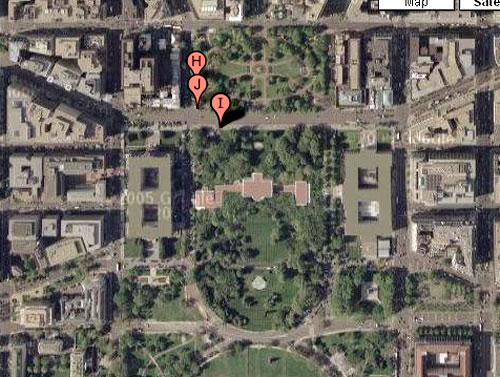 Recently we updated to Google Maps 4.3, its the latest and greatest and even though the changes were small, in some ways they equal big things! The one I want to cover today is Latitude, it seems like a do nothing service, maybe see where your friends are and if they around you, provided that their maps program updates fast enough to show them by you instead of 45 minutes from you! Google does aid the map a bit by sending an email whenever Latitude/Maps finds a friend thats nearby you, but I believe that's a function you have to turn on.

One of the benefits that this version added is friend finder, now Latitude will recommend friends for you, right now its just going off my contact list, hoping that it will soon get smart and go off friends of friends that I may enjoy. For instance, @stericson (who I friended last night because he is trying to get 1000 latitude friends), would his 1000 friends come into my friend stream eventually? I hope so, I know he is friends with a lot of cool people, devs and such.

An issue some are having, they don't want folks to know where they are! To them I say well don't accept them, I guess that cause a problem as well because people are human and humans tend to have a heart. Take this situation, you love your android phone, you told everyone in the neighborhood to drop their blackberry, old nokia or iphone for a nice shiny new android that does it all. So they did! Now they all want to add you to latitude but you don't want your creepy stalker neighbor and your grandma knowing where you are all the time! It seems there is now a Google Moderator Suggestion out asking for a feature to remove this if you don't want it, so you don't hurt the feelings of those people.

Now on to how this is relevant in modern world and social web. Well, I have heard rumors swelling that Google will be using Latitude to go up against foursquare and the up and coming facebook location based status updates, twitter has them too now. But it seems that Foursquare is the big one, they have done it right, its  a game and a way of telling your friends where you are! Google could just best them! With Foursquare you head to the mall and check in, but say for some reason you are the FIRST person to check into the mall. So you say add new location and then you have to wait for the GPS to find your location, sometimes it doesn't, sometimes it does but the location isn't 100% accurate or sometimes you even have to go out and log into google maps so that the device will reset your location. After all that you input all the data about the location and then checkin! If Google were to enter into this, they could just easily have you checkin and since the data is mostly already there (go to maps now and click a location, it has address, phone number etc etc etc) you would just, checkin! No filling out data and all.

You ask, well people won't accept that! They don't wanna download new stuff, well latitude comes free with maps, and from the last numbers I heard, there are more users on latitude than foursquare right now. So its already in effect, I think them adding find a friend into latitude was just another phase in getting this big scheme worked out. Odds are that they would use Facebook, twitter and buzz to let people know where you are as well. Google isn't dumb. They have this slowly working I think! I guess in another month or so we can check back and find out more news or info til then, go enjoy the friend finder!