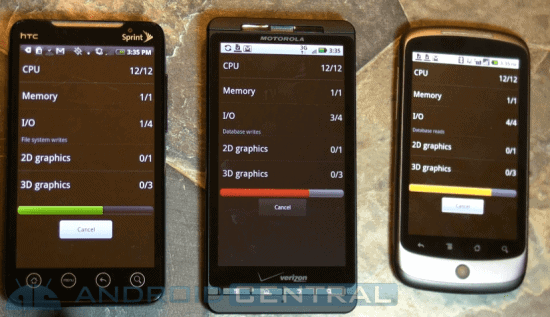 We have seen the Droid X a lot today with the full specs , the complete hardware tear-down and how it runs games. Now let's see the benchmark tests. Phil, over at Android Central, ran four different tests showing us what these top U.S. Androiddevices are capable of. We already know that the HTC Evo has a FPS restriction limiting the device to max out at 30 FPS. Here's the video.

We can see that the Google Nexus One running the latest FRF83 build of Android 2.2 will fly! One of the main reasons is because of that JIT compiler that comes with Froyo. The HTC Evo has the 30 FPS restriction so we won't hold it against it, it is still a powerful device hanging with the Droid X. The Droid X Is going to do everything we are expecting and more! With the HTC Evo and the Droid X not running Android 2.2, there is no denying that they will be the hottest Android devices of 2010.

Do you want to run these tests on your device? The benchmark apps in the video are:

*These free applications are found inside the Android Market.