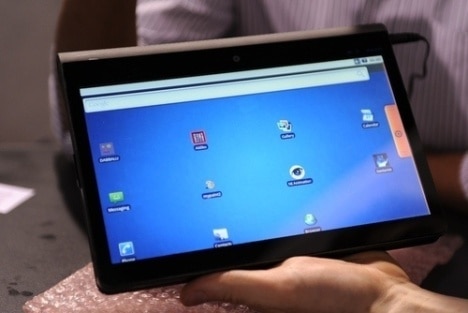 The first thing we all do when we get any idea is to write it down. Its the first and the most important step between the conception and realization of our dreams. We want to become this exact enabler which will help people convert their notions into a reality, to become their Notion Ink.

For us tablets are more than just a media consuming devices. They will replace every individual object we see around, your computer, your table, everything. Even the name will change to portray something closer to Ubiquitous Computing (our first short term name when we realised there is already a company with this name). We realised the use cases and reading and power was one of the most important element of this new generation of computing.

Tegra is one of the beautiful SoCs around. Low power, high performance and the possibilities of CUDA. What else can one ask for! Moreover we will see a shift from serial to parallel computing. Better start from a H/W platform which can leverage this. But we are also working on other platforms.

There can be more models, we will announce soon.

Officially there is no choice. But who can dare working against the hackers or geeks! It will be tough to shift, but yes, you can.

You will have memory as an option. For us, memory needs to be free and user must take a call on this.

There are generation and series of devices and each one will take advantage of each. There is a huge inter-relation of UI and these sensors, but I should be tight lipped here.

This information is not yet in public domain.

Interesting developments here. But right now no. Adam comes with its own App store called Genesis.

Yes, but after rigorous study, Adam became the de facto OS of choice.

There is no Linux distribution on Adam supported officially. But answer is yes.

The idea came when I was 10. So probably the seed was there. And I started in my final year of bachelors. iPad was not officially known to anyone.

It excites. The world is full of opportunities and infinite possibilities.

There is a limit to which one can be arrogant. And there is a little difference seen between arrogance and vision. May the image become clear sooner for the good of everyone.

Not full, but most features. We are constantly working to support more and more features.

Adam is not alone!

Unlike other BIGGIES we are a start-up. Took our time to get the visibility, created a good case in front of the investors and closed the investment. This took its own time. In the meanwhile S/W gained maturity, to time was used preciously. There are few very beautiful stuff we have done on the UI and S/W.
There are 2 concepts. First is, launch it ASAP, capture the market, become the KING, and Kill the competition. Second is, this is our first product, our future depends on it. Its not about the initial market, but the sustenance, brilliance, and competing in future with BIGGIES. We are not one product company. We have taken a calculated approach on the launch.

Water, Water everywhere, not a drop to drink. Seriously, which one has got the eco-system?