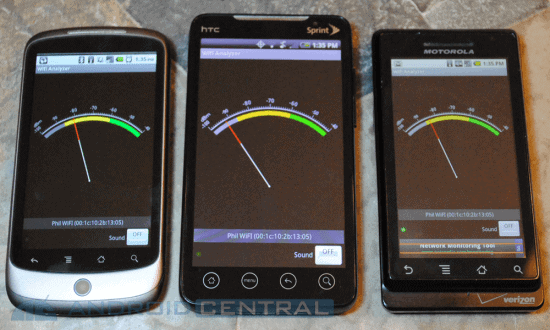 Rumor going around is that the wifi on the evo 4g isn't up to par, with other android phones and other phones around as well. But how exactly does it compare? What's the deal? Here are some tests to help show a bit.

My router's in one corner of my house. I started in the corner of the house farthest away, working my way back toward the base. I held the each phone in the same manner, pointed in the same direction, and let it settle on a signal. Rooms are listed from farthest to closest. Strongest signal is noted in bold.

Note: Evo 4G was tested with two radios. First number is stock, second is 1.39.00.05.31 fromGeek for Me. Also, I'll re-run this test with a Droid Incredible, just as soon as I find out in stock.

It seems that these tests show that the wifi isn't so hot at all! Hoping that Sprint/Android realizes this ASAP and is able to fix it ASAP! This isn't good, especially when they have things like QIK that they install on the phone before it even gets to you that sort of relies on having a good connection and if you are home doing these videos, its even better to have a good connection, why use 3g when you have a great home connection? Well, 3G may have to do for now I suppose!