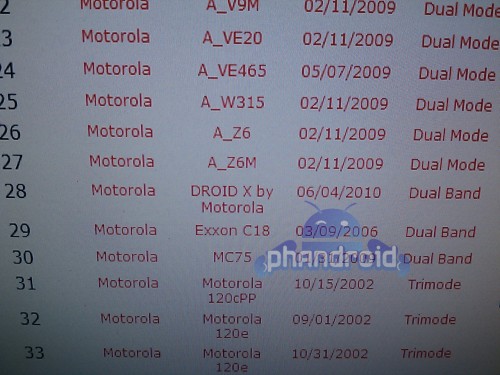 Motorola has been in the presses quite a bit recently first with the Droid, now promising 20 more Android phones, and even pushing the OS even further by trying to get a 2Ghz processor on board with one of their phones. There was also a few blurry camera shots of the Droid Xtreme and now there are more shots regarding a Motorola phone heading to Verizon but under the name of Droid X.

Whether or not this phone is the Droid 2, successor to the original Droid, officially and after all we'll never know until its all said and done, especially with more images with details revealing infect a device that really does look like it could sport the name Droid 2. The stats that this phone has sure are interesting though, it is a dual-band 1xEDVO (for CDMA carriers) and 4.3 inch screen, 480×854 resolution display, 0.39 thick, 2.5 inches wide, 5.01 inches tall, and about 5.47 ounces.

Another interesting detail is that there is a software listing for Safari, the browser by Apple, 4.0 and what exactly this means is anyone's guess. This could be Android changing itself up, though with Apple it is unlikely, or just a hiccup in the system in trying to determine what version of WebKit  browser that the phone is running.

In this case, and many others, speculation can only go so far but I for one am really interested in what this phone will mean for Motorola, Verizon, and Android due to the Droid campaign really kicking the OS off to the masses. Let's hope that more information gets released or some kind or official poster of sorts for the device as well as more information of what version of Android it is running and whether it is stock Android or a MotoBlur/NinjaBlur customized phone.