We’re only in the middle of June, and while we’re all still riding the coat-tails of the EVO 4G’s launch, most of us are already looking forward to what’s coming next. For some on the Verizon network, that means the Droid X (formerly known as the Droid Xtreme and Droid Shadow), or the Droid 2. Rumors have it that they could be launched, both of them, in July, while a fresh rumor suggests that the Droid X will be launching in July, while the Droid 2 would see official release in August. Either way, we’re still aching for more details, and while these slides outlining the commercials showcasing the devices share some insight, they aren’t as in-depth as we’d like.

The first slide, which outlines the “Digits” commercial, focuses on the Droid 2’s new-fangled ability to rock Exchange Email. Good news for all those business types out there, for sure. The other point to take away from this? The Droid 2 has a 1GHz processor, too, apparently. At least, that’s one of the bullet points to the commercial, so we certainly hope that’s still a feature. 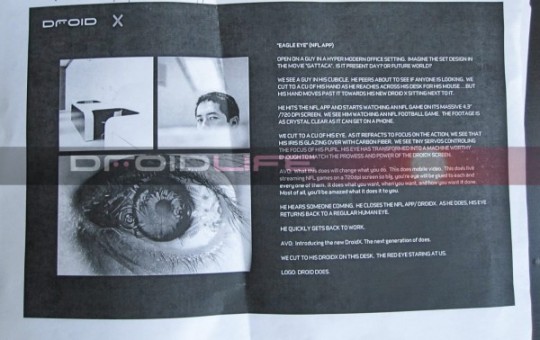 The other two slides focus on the Droid X. One focuses on an NFL application, called “Eagle Eye.” It’s purpose is to talk up the device’s 4.3-inch screen, and the fact that if you download this application, you’ll be watching the NFL on a giant screen, with unbelievable quality. As for the last slide, which is all about “Media Mogul,” centers around an application called EyeCon. It’s standard on the Droid X, it would seem, and it’s designed to make your Android-based handset the manager of all your multimedia devices in your home. Basically, you’d have a mobile media center, right there on your phone. 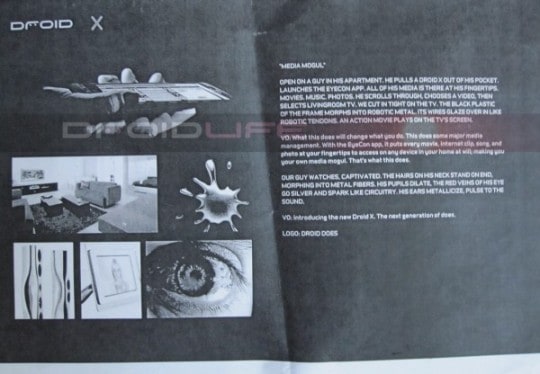 Anyone out there now even more excited about these devices? Or, are you waiting for some more pictures, hands-on video, and an official release date? We’re wondering if those 1GHz processors are going to stick around, considering we keep hearing conflicting reports, especially about the Droid 2. We hope Motorola’s focusing on the high-end with these devices, especially if Ninjablur is going to be something they want to attract customers. As soon as we know more, we’ll be sure to keep you informed.

Which device do you want?