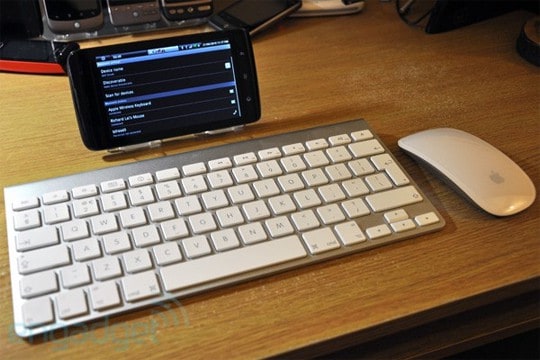 While many of us are still waiting to get out hands on the Dell Streak and hoping that it will show its face on a U.S. carrier, it appears that the Android tablet keeps unveiling more hidden gems to those who have been able to get their hands on one already.  Nearly all Android devices that we have played with support Bluetooth devices, but the Dell Streak may be the first Android device to feature the Bluetooth HID (Human Interface Device) profile.

The Bluetooth HID profile isn't anything new, but it does allow the Dell Streak to be the first Android device to support Bluetooth keyboards and other input devices that work over the HID profile.

The guys over at Engadget have been able to pair the Dell Streak with an Apple wireless keyboard.  In the video they posted, typing on the keyboard was smooth and seemed to appear on the device instantaneously.  They were also able to pair a Bluetooth mouse with the Streak but since Android does not have native cursor support, there was not much (or anything) they could do with it.

For the time being, there's really not much you can do with the HID Bluetooth profile besides use a keyboard for typing.  Hypothetically, you could use a Bluetooth remote control, gaming control, or even another Android phone as a Human Interface Device for the Dell Streak.

Once the Dell Streak's HDMI dock hits the streets, you might even be able to surf the web on your 50" television while sitting across the room on your couch using a Bluetooth keyboard and mouse.  Let's just hope that more Android manufacturers realize the added value of having a Bluetooth chip that supports the HID profile and include it in their upcoming Android devices.