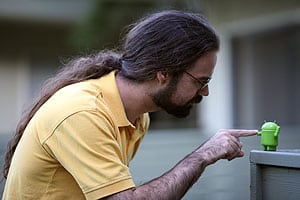 When the iPhone gets an update it's a Hollywood production. The media makes it a big Biden-ing deal. Reporters who wouldn't know a bug from a feature rush for front row seats.

It's a real top-down production.

When the Android platform goes through a major upgrade, as it did yesterday with the update code-named Froyo, things are a little different. The code is simply dropped, a blog post is written describing it. The closest thing to an event, Oscon, rolls on in Portland, not a cup of coffee spilled.

It's bottom-up by design. It's the hardware that runs the software which gets the star treatment. Users buy hardware, and phone contracts, so this is where the press runs to.

But it's the code which determines what the hardware will do. The code should be the story, and users should be demanding the latest code in order to maintain compatibility across the Android ecosystem.

What's clear in reading the post of Jean-Baptiste Queru (above, from the Android Developers Blog) is that his job is becoming as complex as that of Linus Torvalds himself. Over two months his team had to review and make decisions on adding over 1,000 changes, accepting 20 every business day.

Queru notes that developer tools are being created in the open alongside the code, and the Compatibility Test Suite was upgraded in concert with the code. This is important in trying to assure compatibility.

If Google wanted to I'm sure they could make Queru a star. He's French, don't you know, and sports the neatest ponytail in open source since Jonathan Schwartz went into the Sun set.

In time I think they should. Speeding the movement of the latest software into all Android hardware is what will make Steve Jobs sweat. And, being my age, he can't grow a ponytail any more.