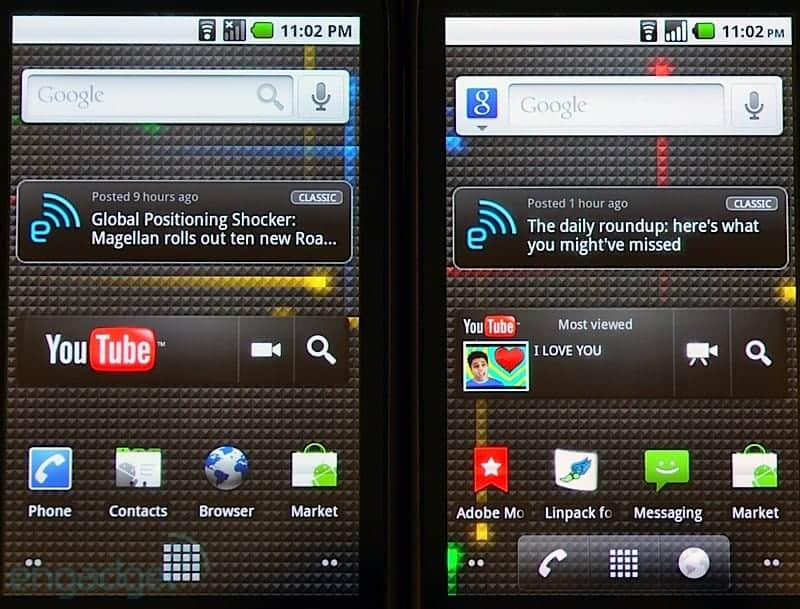 FroYo (Android 2.2) is coming out and its bringing Change, its the Obama of Android firmware. The new firmware update is not minor, its not just bug fixes and it doesn't just change one aspect, it basically will enhance and change your phone in MANY ways. The update got announced officially at Google IO on May 20th 2010 and does not have a release date yet, but since then, just one day later, people have made modified versions of it via SDK and some got given versions by Google, so I guess it seems this thing is OK to review. I am going to tell you what I have seen and heard.

When you first get it you will turn on your phone and see that your app drawer is different, its added a dialer button next to it as well as a browser button, pretty handy, a lot of launchers are doing this now and some even add more, such as Google talk or messaging, but I guess Google wanted to be minimal, which i am fine with. Its a nice touch and I am getting excited just thinking about it.

It seems that a lot of widgets have changed too, Youtube for one has changed, it now is bigger (still appears to be 4×1) and shows the most recent played, it also has subtle UI changes, its pretty cool looking and really just makes the whole thing flow.

Hotspot and USB tethering is something that as long as the Service Providers don't get involved with, it will be awesome, something that will help many many many people. Just a great service all around, turn on your device and others can get wifi service via your device, or plug it into a laptop/netbook and you are good to go with internet, its a bit slow, but thats just how it is, better than dial up though!

There is now an HQ button in youtube but unclicking it gives smaller and worse quality, so unless you are in a bind and need to save battery or something, don't unclick the button, its cool to see that they are doing good with youtube, hopefully they have changed it so you can upload over 3G but I have yet to see anyone say anything about that.

I am also glad that they decided to throw app storage via an SD card on there, thats something that SOO many people have been wanting since Android 2.0 came out, that was a feature that got some notice and there are even mods out there right now that do just this, but now we have it native, and it works, and its nice. This feature is going to be good and push devs to make BIGGER better games, both graphically and gameplay wise. This is so good for Android and mobile phones period.

Some of the other highlights, briefly:

This Image excites me A LOT, see that speed! SEE THAT! Wow, Stock Droid, Stock Nexus both on 2.1 and then a stock 2.2 Nexus and it just, wow, thats fast. This is something that is awesome and i am glad that Android was able to achieve this, just makes me glad we have good devs with android and that the JIT compiler got worked on and done right, there has been a mod of that out as well but it never was stable. Android 2.2 seems quite stable, all the demos at IO were fluid and never had many problems (well minus the beta ones).

Did anyone mention that flash content is coming, with all of the other info Flash almost got a back seat, it was mentioned briefly but is still a huge ordeal, well it got the second biggest applause and cheers, first biggest was everyone getting an EVO 4g, but I am not talking about that, too jealous.

I can't forget Adobe Air, its on my phone right now, but I have no APK files to test it (if you have any you wouldn't mind sending, we will review them) I did get one demo of an app from an adobe dev, its a tip calculator and it loaded, it worked, so I know that it is working, but it was a tad slow and I assume it was the app not the player, but I haven't been able to test it further. I have seen other peoples videos of their apps and they run nicely, air may be bigger than flash in some ways because it will give us tons of apps.

Flash/Air will be good and its going to be big, watching all your videos, streamlined with the browser, getting excited to log into engadget, gizmodo or even this site, Androidheadlines.com and view all the video content in the page right from the browser (which by the way now has IMPRESSIVE speed, they are calling it the fastest mobile browser ever, wow. 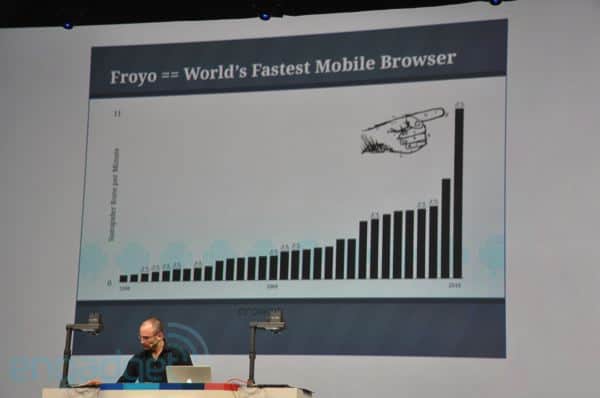 This is speed at its finest. Should make flash and everything else even easier to use.

Want to download all your apps at the same time, or maybe even not tell any to download at all, they will do it themselves. That is righteous. That is amazing and just very cool. That is coming with 2.2. This is very cool and makes it easy on many many people.