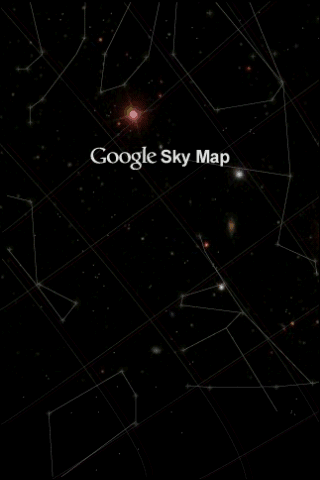 Google Sky Map is a simple app by Google for finding constellations, planets and other celestial objects.  Simply hold your phone up to the sky move from one point to another across the sky and the phone's accelerometer will orient the screen with where you are pointing at the sky. You can look at as much as you want to see.  You can either have all of the planets, stars, constellations and Messier objects showing as a whole or under Settings you can only show what you want to look at.  It gives a Gallery to find common objects like Nebulas and nearby Galaxies.

Also you can toggle between Regular mode and Night mode.  Night mode is glaring in normal light inside but quite helpful when you are outside using this app.  But you don't even have to wait for night time to view. It works during the daytime as well. (Though more fun at night.)

My opinion – I think this app is cool in a geek way. This was one of my first choice apps when I got the MT3G last summer and have used several times up at my parent's home in Northern Minnesota.  The app is very easy to use and educational at the same time.  I was able to select Andromeda Galaxy from the Gallery and find it on the map using the locate feature from the Gallery.

It's something to impress friends and family (and the occasional stranger) and best used out in the boondocks away from the city lights to get it this app in its full glory.

Conclusion: If you are an astronomy addict or just love looking up at the sky on a warm summer's night, then you have the whole sky right at your fingertips.